I spent August 8 through August 26 in Idaho this summer, and I sat in with Michael G. Batdorf, notable singer/songwriter, twice at Pendl’s cafe in Driggs during that period….

I spent August 8 through August 26 in Idaho this summer, and I sat in with Michael G. Batdorf, notable singer/songwriter, twice at Pendl’s cafe in Driggs during that period. (On a third occasion I showed up to play and found that Michael was held up behind 600 bicyclists conducting a road trip from Jackson Wyoming to Victor Idaho, so I ended up playing the gig solo.) I recorded the entire two hours on the morning of August 24, and this piece, which is titled “Beyond The Mask,” is one of my favorites from the set. 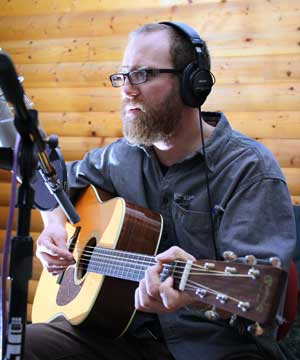 The piece is a beautiful ballad in Eb minor; I heard it for the first time during this performance. The only harp I had in my kit that could manage that key was a Hohner CX12 chromatic in the key of E, which meant that I played it in the equivalent of B minor on a C chromatic. That wouldn’t necessarily have been my first choice, but it turned out that the low chromatic harp (a minor 6th below a 12-hole chromatic in C) worked very well on the piece.

The performance here is entirely improvised. As always when I sit in, I tried to create an arrangement for the piece, not just play licks, and this arrangement has a beautiful, yearning feel to it, with variations on the basic line that include octaves and various chords. I recorded the performance live with a Zoom H4 positioned about 20 feet from the stage, and while there’s some crowd and ambient noise, the overall quality is thoroughly listenable. The gear I used in this performance includes a Digitech RP360XP running my DIRROOM patch (direct amp model with room reverb) from my latest patch set, an Audix Fireball mic, and a Peavey KB2 amp. It all sums to loud and clear, which works for this music.

The harmonica is relatively restrained until about half way through the piece, roughly at the two minute mark, when the intensity of both the harmonica and the guitar increases dramatically. The harmonica in effect becomes a voice, taking center stage while the guitar strums a ferocious accompaniment.

The music goes to some pretty unusual places, far beyond the stylistic boundaries of the typical guitar/harmonica duo. There’s only two ways to get music like this: you compose it note-for-note and get great people to play it, or you get together with somebody great and improvise it on the spot. The latter was the approach this time. It grabbed the audience by the throat, not to mention the musicians. I’m glad I had the recorder running.

Beyond My Eyes by Michael G. Batdorf, harmonica by Richard Hunter

I have more recordings from the gigs I did in Idaho on this trip, including some good takes from a show with Derrik and the Dynamos. Stay tuned.