I’ve been using the Digitech JamMan Solo looper pedal for some time now. Last week Zzounds.com offered a B-stock JamMan Stereo looper for 2/3 of the normal retail price, and…

I’ve been using the Digitech JamMan Solo looper pedal for some time now. Last week Zzounds.com offered a B-stock JamMan Stereo looper for 2/3 of the normal retail price, and I picked one up while I had the chance. This review describes some of the differences between the two and a few reasons why the JamMan Stereo might be worth the approximately $100 extra that it costs on a normal day. 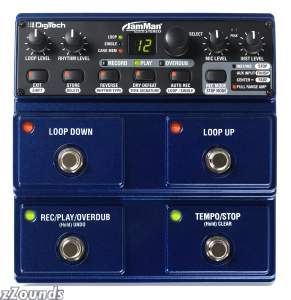 What they both do


Both JamMan loopers do a very nice job on the basic functions you expect from any looper. They record loops, they play them back, and they store recorded loops for future use. They both offer controls for loop playback volume, which is great when you’re playing over a pre-recorded loop (or one you just recorded), an example of which is my recent live recording of Bob Dylan’s It Takes a Lot to Laugh, It Takes a Train to Cry. They both offer simple drum machine-type rhythms for self-accompaniment with a separate volume control, which could be useful for some users (though I’m not interested, at least not now). They’re terrific tools for a variety of purposes, and they’re the best thing I’ve ever found for developing new grooves–the simplicity of operation, and the ability to layer sounds instantly, means that they never get in the way of the creative flow.

Both devices record loops at 16 bit 44.1 kHz resolution, which is the bare minimum for serious recording and works very well on stage. Both devices also include a slot for SDHC cards, which allows the user to augment the 35 minutes (and 99 slots) of built-in recording time for loops with up to several hours (and 99 slots) of additional loop time. This effectively means that you can record 99 backing tracks to an SD card, put the card in the JamMan, and use it for a playback device on the gig (with the option of recording additional layers over the track in performance, which is something you can’t do with your MP3 player).

Both devices can be connected to the computer via USB, and once connected can use Digitech’s JamManager software to store and retrieve loops to and from the computer, which gives the user basically infinite storage for a library of loops. JamManager will also import audio in either mp3 or WAV format and convert it to loops for the JamMan, which makes it pretty easy to use your favorite backing tracks with the device. Loops are stored in different formats for each of the JamMan devices, and one device can’t “read” loops for the other. This is a little bit of a drag, but the good news is that a single SD card can store loop setups for both the JamMan Solo and the JamMan stereo, so you can bring one card to the gig along with both devices and have a backup ready to go if you need it. The JamManager application is kind of clunky, as usual for Digitech software–these guys don’t yet seem to understand that they’re really in the software business–but it gets the job done and is a useful addition to the hardware.


The JamMan Solo sells for about $200 new compared to $300 for the Stereo. It’s a much more compact device than the Stereo. It’s also operated with a single spring-loaded footswitch, which takes a good hard shove to trigger. (Brendan Power uses a Boss RC-2 looper, a device that’s very similar in terms of operations, and he removed the spring from his, which makes it easier to trigger the device by hand rather than foot.) The JamMan stereo has four metal toggle switches on its surface–loop up, loop down, loop stop, and loop play/record/erase–and these are much easier to operate than the single switch on the Solo. (An optional 3-button footswitch, the FSX3, which offers loop stop, up, and down–but not loop start/record, alas–is available for the Solo, and I recommend it strongly if you plan to use the Solo in performance. Without that footswitch, you can’t change loops with your foot, so if the Solo is on the floor you have to bend over to change the loop with your finger. Grrrr. The same footswitch performs an additional function on the JamMan Stereo: it allows you to instantly remove or re-insert the latest layer recorded, which is really nice in performance.) The expanded array of switches on the Stereo is almost worth the difference in price by itself, because it makes the device MUCH easier and more precise to use for both recording and performance. In addition to the improved ease of operation, the Stereo offers a dedicated mic input with volume control, dedicated stereo inputs for an instrument (which can also be run in mono) with a separate volume control, and stereo outputs (which can also be run in mono). In effect, the JamMan stereo has a simple built-in mixer, which you’re likely to appreciate plenty when you’re running pre-recorded loops with mic and instrument inputs all at once. The Stereo also runs on the same power supply as the Digitech RP250/255/350/355, which the Solo does not. If you own one of the RPs, it’s nice to be able to use a single power supply for backup on both.

The JamMan Solo is a well-built device with a solid, if minimal, set of features. It sounds good, it’s reliable, and the ability to combine it with an SD card for hours of additional loop and backing track storage puts it well ahead of anything else in the under-$200 range. The FSX3 footswitch adds $35-40 to the price, and at $235-240 for the combination you really have to ask whether you should go for the JamMan Stereo, which retails new at about $300, instead. The Stereo sounds just that much better, has features that make it more flexible and easier to use onstage, and has all the good features of the Solo and then some. The fact that it’s relatively difficult to find either of these devices used tells you something: the people who own them like them.

I was going to sell my Solo once I got the Stereo, but now I’m planning to hold onto it for a backup. My guess is that you won’t be disappointed with either one. If space onstage is really tight, you want to take out the spring and operate it by hand as Brendan Power does, or you just can’t afford the extra $60 for the Stereo, the Solo will work fine for you. If you can afford the extra money and you’ve got the space at your feet, get the Stereo.